[How To] Enable Simplified Action Center In Windows 10

Action Center is one of the hundreds of new features in introduced in Windows 10. It helps you to stay updated via notifications from system and apps you’ve installed. Thus you didn’t miss even a single update due to presence of Action Center aka Notifications Center in Windows 10, awesome!

In this article, I’m going to share you simple registry tweak that will help you to enable simplified Action Center that takes comparatively less space on screen as compared to the default one. As you can see in the below shown image, which shows both Action Centers, the simplified one looks more decent. If you’ve tested Windows 10 previews, you can recognize this modified Action Center very easily, as it was offered in earlier builds. 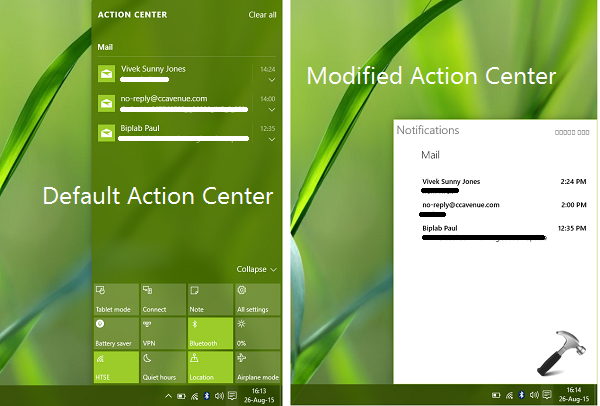 How To Enable Simplified Action Center In Windows 10

3. In the above shown window, highlight the ImmersiveShell key in the left pane. Then in corresponding right pane, you’ll find that UseActionCenterExperience named registry DWORD. By default its Value data is set to 1, which indicates that registry returns true value as default Action Center. Double click/tap on the same DWORD to modify its Value data:

4. Finally, in Edit DWORD Value box, change the Value data to 0. Click/tap OK and close Registry Editor. Restart the File Explorer using Task Manager and click/tap notifications icon in taskbar, you must get the simplified or modified Action Center.

Checkout the live demonstration of this trick in following video:

In case if you want to restore original/default Action Center later, revert the registry DWORD Value data to 1 in step 4.