[TIP] 5 Ways To Boot To Desktop Directly In Windows 8.1

This article will provide you various options so that you can boot to desktop directly in Windows 8.1 system.

We all know that Windows 8 introduced the Start Screen feature, which we get firstly after start up of computer. Then from the Desktop tile on Start Screen, we’re able to get into classic Desktop mode which was opened directly in recent Windows editions. But many users find this irritating, especially those one who were against Modern UI. This debut has forced Microsoft to implement the options, so that user can configure their way whether to boot to Desktop directly instead of Start Start or not. These options are finally available in recent release, Windows 8.1.

There exists some of the ways, using which you can make your Windows 8.1 to boot to Desktop directly, so in this article we’ll discuss about them.

5 Ways To Boot To Desktop Directly In Windows 8.1

The basic method to get into directly log on to Desktop resides in Task Scheduler. Using this way, you just need to create a scheduled task, so that it can be configured with a script, which can redirect computer to get into Desktop. Following article covers this method in detail:

But some of the users used this procedure, find it little bit of tedious, however it works. So you can checkout instant alternatives mentioned below.

This is the pure way in Windows 8.1, natively used for the purpose of signing into Desktop. You can configure it by going to Taskbar & Navigation Properties (right click on taskbar, select Properties). In this window, switch to Navigation tab. You should now see this: 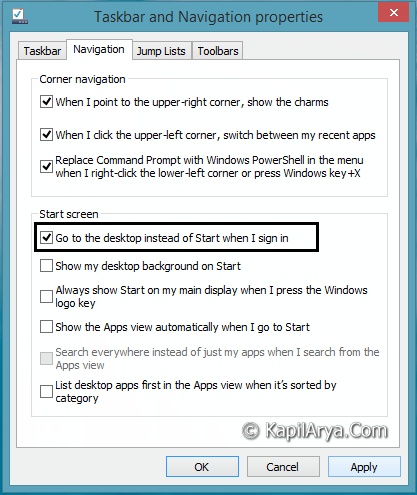 In the above shown window, select Go to the desktop instead of Start when I sign in. Click Apply followed by OK. You can do a restart and verify the way you’ve just configured.

3. In the right pane of this location, look for the DWORD named OpenAtLogon (refer above shown screenshot). Double click on the same DWORD to modify: 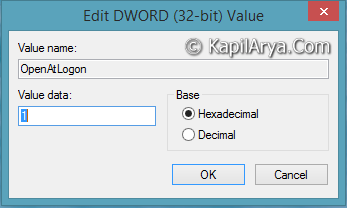 4. In the above shown box, type the Value data equals to 0 in order to boot to Desktop else remain 1 for boot to Start Screen. Click OK. You may close Registry Editor and reboot to get results.

There is a simple yet logical trick to boot into Desktop directly. This is possible due to position of Desktop tile on the Start Screen. If the Desktop tile exists on top left corner as indicated in following image then, you can make this trick alive. 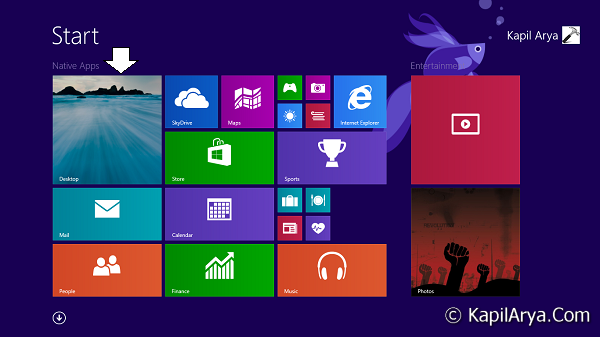 After repositioning Desktop tile, at the login screen, input the password and do a long press with Enter key until Desktop appears. 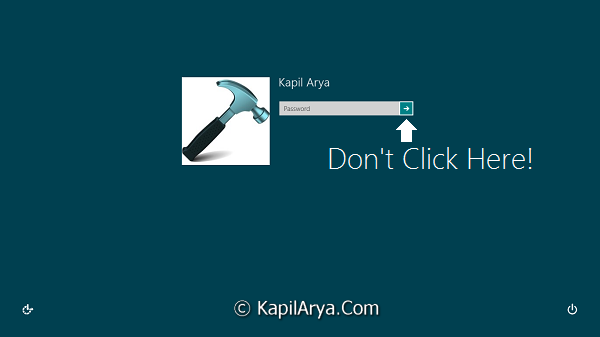 This trick is meaningless, if you have auto-log on enabled.

That’s it for now guys. Hope you found the article useful!