FIX: This PC Can’t Be Upgraded To Windows 10

Microsoft has previously released Windows 10 May 2019 Update i.e. Version 1903 globally. The update to V1903 comes with many new features as discussed in this article as well updates/improvements to existing features. You can download V1903 via Windows Update, via Media Creation Tool, via Update Assistant Tool or using ISO file.

But while upgrading to V1903, we came around following message:

This PC can’t be upgraded to Windows 10. 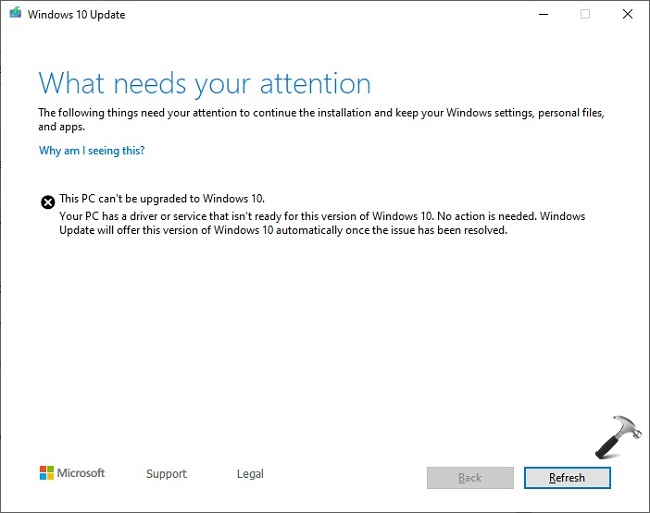 If you’re also facing this issue, here is how to bypass this error and upgrade to V1903.

FIX: This PC Can’t Be Upgraded To Windows 10

Actually this is known issue with V1903 update, according to Microsoft. The company says that if you’ve any external device such as USB, SD memory card or UFS card attached, this error may occur. The reason behind this is re-assignment of drive letter to such devices. If the device is mounted with specific drive letter, after upgrade it may have different drive letter assigned. To avoid conflict, V1903 update is kept on hold where this possibility is present and you get the above mentioned error. Microsoft also believes that issue may occur with internal hard drives as well which is expected to sort out by regular Windows Update. As a temporary workaround, unplugging such kind of devices may solve the issue and you can then normally upgrade to V1903.

In some cases, the title error may appear with different wording, such as ‘Your PC has a driver or service that isn’t ready for this version of Windows 10‘. In that case, you need to update all your drivers, apps/software installed on system to latest version. Microsoft has provided a way to find out incompatible apps. Run the batch file downloaded from here. After running the batch file, you’ll be able to spot the incompatible app and removing it will allow you to upgrade to newer version.