In this article, learn how to convert a disk from MBR to GPT in Windows 10 without losing data and via MBR2GPT tool available on Version 1703 or later.

While installing Windows 10, you need to convert the Master Boot Record (MBR) disk into GUID Partition Table (GPT), if you’re installing Windows on UEFI system and MBR partition table comes in your pathway. Under such condition, you receive “Windows cannot be installed to this disk. The selected disk has an MBR partition table. On EFI systems, Windows can only be installed to GPT disks.” message.

So this message can be suppressed with MBR to GPT conversion as described here:

Steps to convert a disk into MBR to GPT format

However, with above mentioned conversion, the biggest disadvantage is that you lose your data. Hence to deal with this problem, Microsoft has introduced a command-line utility tool, named MBR2GPT.exe available in Windows 10 Version 1703 (Creators Update) or later. This tool basically converts your MBR disk into GPT without erasing your data on the disk. In this article, we’ll discuss how to use this tool efficiently.

MBR2GPT tool can be simply executed in Command Prompt window, just like other tools such as DISM, SFC etc. The best thing about this tool is that you can also run it from Advanced Recovery Command Prompt aka Windows Preinstallation Environment (Windows PE). Error/warnings with usage of this tool are logged under %windir%. 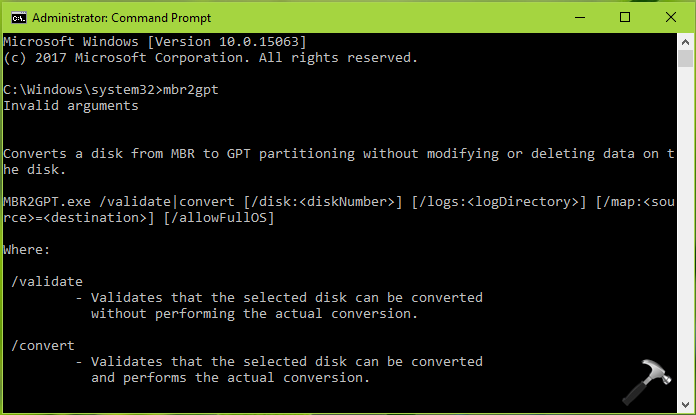 The general syntax to use this tool is as follows:

You can substitute following variables in above syntax, as per your requirement:

For extensive details about this tool, interested readers may head over to this Microsoft documentation.

Hope you find the tool useful!