If Windows 10 November Update fails to install, freezes on 44% or so, then this post may help you to fix. Also see PowerShell method to install the update.

Recently Microsoft pushed the Windows 10 November Update for end users, about which you can read in following article:

If your system can’t detect update, read about that also in the same article linked above. We have found that many users are having issues when they install this update. Users are not able to complete the installation of update and gets either of following symptoms: 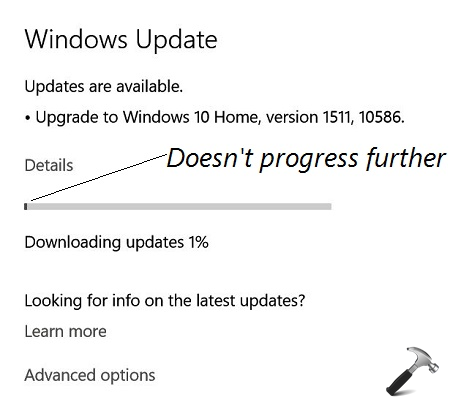 If you see any of the behavior listed above, this article will help you to survive in this condition, so that you can install the update and avail its benefits.

Though there is no specific fix for this problem, since many factors may dominate in this issue. You can try these fixes and see if they helps you:

FIX 1 – Check Whether You Can Install Other Updates

We’ve to first verify whether Windows Update is working properly on your system or not. For that, try installing other updates and see if they installs.

In case, none of the updates install and all of them freezes/does not initiates, you may need to reset Windows Update components. You may try Windows Update Troubleshooter as well, to automatically detect and patch issues. Also make sure, you’ve unplugged all the external devices such as USB/SD card, printers to the system while installing update.

If only November Update freezes and others install flawlessly, try FIX 2.

In Windows 10, Windows Update doesn’t allows us to install a single and particular update. So you can use the this PowerShell based method, which will help you to detect and specifically install November Update.

If November Update still fails to install, you can head on to FIX 3.

If FIX 1 and 2 collectively didn’t solved the issue, then you may have to reinstall Windows 10 without affecting your data. But why to reinstall when you still have a good option left! That option is to download Windows 10 ISO which includes the November Update and you can use that ISO to upgrade from build 10204 to 10586.